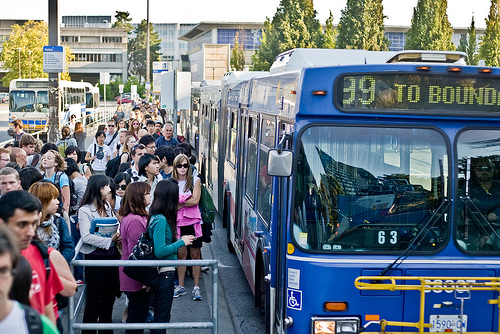 Public transit service levels in the LowerMainland have remained practically unchanged over the past seven years. In that same period demand has soared.

Metro Vancouver residents will be asked to vote on a 0.5 per cent hike in B.C.'s Provincial Sales Tax to improve public transit service, in a referendum this March. Our votes will approve or reject the Metro Vancouver Mayors’ Council plan for more transit routes, more buses and HandyDART vans, more options for cyclists, and increased service all over the region.

As part of this campaign, we invite you to a Transit Forum on Thursday March 19th.

We'll be discussing the upcoming transit and transportation referendum and working in groups to build relationships and develop strategies to ensure that the referendum passes.

It's important to everyone in Metro Vancouver that this referendum passes - join us and help make this happen!

Join us and help win better transportation and transit for the whole region!