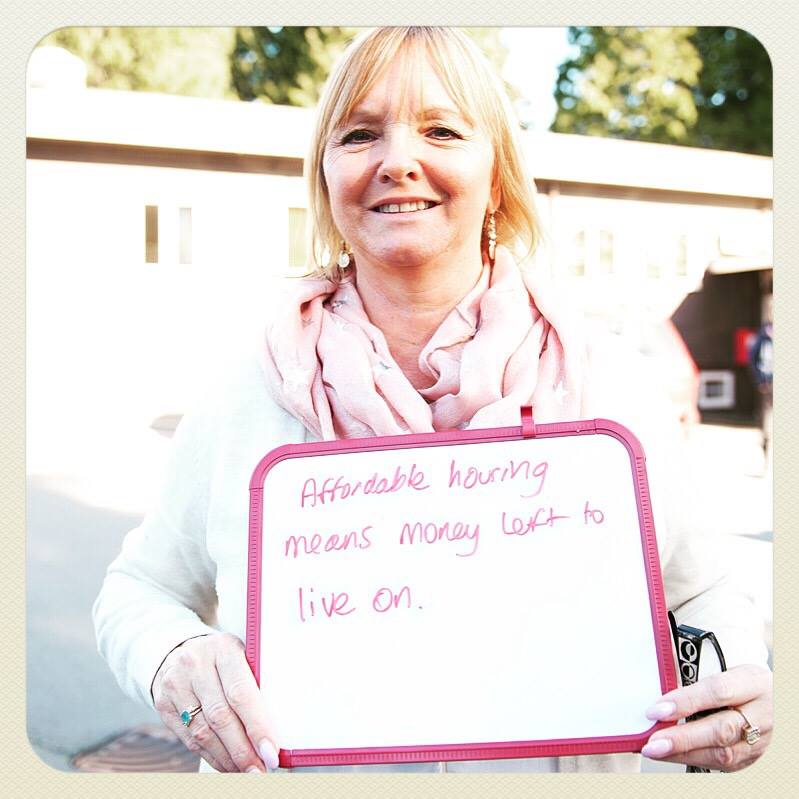 The MVA Housing Campaign Action Team is proud to announce a victory for OUR HOMES CAN’T WAIT! — a campaign and community vision for 58 West Hastings Street, Vancouver.

Today, at the Carnegie Community Centre, Mayor Gregor Robertson, along with five of the City’s housing management staff and Councillor Andrea Reimer, in front of 60 community members representing 15 local organizations, signed an agreement to begin the process to build 100% welfare rate housing at the city-owned site at 58 W. Hastings (opposite Army and Navy).

This Action wasn’t officially a part of the MVA Housing Campaign but Carnegie is a member of the MVA and the MVA Leadership Institute has taught the key people involved in today’s success how to use the IAF organizing skills, surface and train new leaders, and organize over 9000 people who are members of or serviced by 15 local groups to bring this campaign to today’s success. It was beautiful to see the organizers’ work for the low income community get a firm YES from the Mayor and other COV housing decision makers in front of the assembled community members!

One of the MVA Housing Campaign’s asks of the City of Vancouver is for all new developments to have covenants to keep a portion of the units as non-market housing for people employed in Metro Vancouver. These homes could be built by either the private or the public sector, as long as the covenant is in place. True, we knew that this wouldn’t directly address the problem of low-income citizens who don’t have jobs — single moms on social assistance, disabled people, and the those who organized OUR HOMES CAN’T WAIT! campaign. That’s why the Carnegie organizers needed to have the energy and skills for their own campaign. But a big increase in housing options for working people would lessen the pressure on existing housing stock and other new developments.

The OUR HOMES CAN’T WAIT! campaign started in January 2016 when Carnegie organizers brought people together at the two town hall meetings and the people decided to concentrate on one major goal in the campaign — to get 100% welfare rate housing at the city-owned site at 58 W. Hastings (opposite Army and Navy) for 1/3 Chinese, 1/3 Indigenous, 1/3 DTES residents who are homeless or live in SROs with at least half of units to be held by women, and some units for people with disabilities; to be run by and accountable to residents similar to the way co-ops are run, with residents covered by the Residential Tenancy Act and residents trained and paid to provide maintenance; the bottom floor to be free meeting space for community, cultural supports and peer services and amenities like garden on top, balconies, fitness room, and 500 sq. ft. minimum unit size.

That’s what they won today!

Today’s speakers told their personal stories about the lack of affordable and decent housing. People living in the tent city currently occupying 58 W. Hastings St. lot politely asked the City officials for toilet, washing, and garbage disposal services.
Community members’ stories also described the other “asks” in the OUR HOMES CAN’T WAIT! campaign for the Mayor and others assembled.

This year saw record high homelessness in the Downtown Eastside, with 836 people living on the streets and in shelters. Despite the intensifying gentrification pressure and the worsening housing crisis, only a handful of new welfare rate social housing units will open in 2016. To stem the tide of displacement and to end homelessness, we need at least 10 sites of social housing with about 100 to 150 units on each site. These sites should be developed in collaboration with the low-income community and community groups.

This is an overlap with the MVA Housing Campaign ask of the COV. In the Downtown Eastside over 300 affordable SRO rooms were lost in 2014. With new condos opening up across the Downtown Eastside we expect to lose hundreds more SRO units in the coming years as gentrification pushes up rents. The existing SRO are inadequate, poorly maintained, bedbug, cockroach and rat infested. We need immediate action to protect SRO hotels, bring them up to livable standards and make sure people on welfare can afford the rents. The DTES SRO Coalition is also using IAF community organizing strategies to educate SRO residents about their rights through monthly meetings in the SROs.

Low-income people across the city and province are continuously evicted and displaced by rising rents, renovictions and demolitions of existing affordable housing. We need stronger protection of all existing affordable housing. We need to tie rent to the unit, instead of the tenant, that way landlords can’t increase rents between tenancies. We also need a rent freeze until welfare, pensions and minimum wages are increased a lot.