This is a crucial time for HandyDART riders. Both the NDP government and the mayors have made some impressive promises about HandyDART and TransLink. But they need to hear you demand action!

The TransLink Mayors’ Council is meeting on Thursday Nov 16 and we will be there. Please join us! 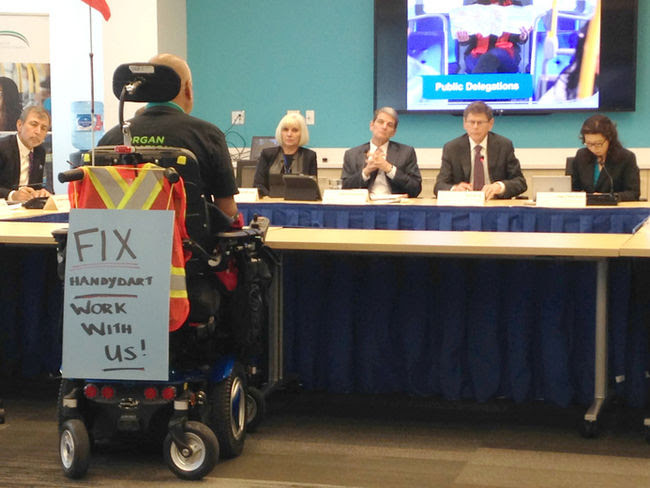 The decision will be made soon on contracting out HandyDART out again for a minimum of 3-5 years, or bringing HandyDART in house. Several big corporations have already filed their proposals. We need to increase the pressure on the mayors and the NDP government to bring HandyDART in-house!

One of the most important promises the NDP made during the election campaign was to “Fix TransLink” by restoring democratic control. The BC NDP platform states that the “BC Liberals made a mess of Metro Vancouver’s transportation governance, by undermining the mayors, giving power to Liberal appointees over elected officials [and] passing the buck when convenient.” The TransLink Mayors’ Council agrees accountable governance is needed.

A new report on HandyDART has just been released. It recommends bringing HandyDART in-house as a TransLink subsidiary, and restoring accountable governance of TransLink. The report was presented to the TransLink Mayors’ Council, but so far most of the mayors are not speaking out to support HandyDART riders. (The report is available here as a PDF.)

We believe that high quality HandyDART service should be non-negotiable. If you agree that that HandyDART should be brought in house now, and that TransLink needs accountable governance join us on November 16, and please write or phone your MLA AND mayor today!